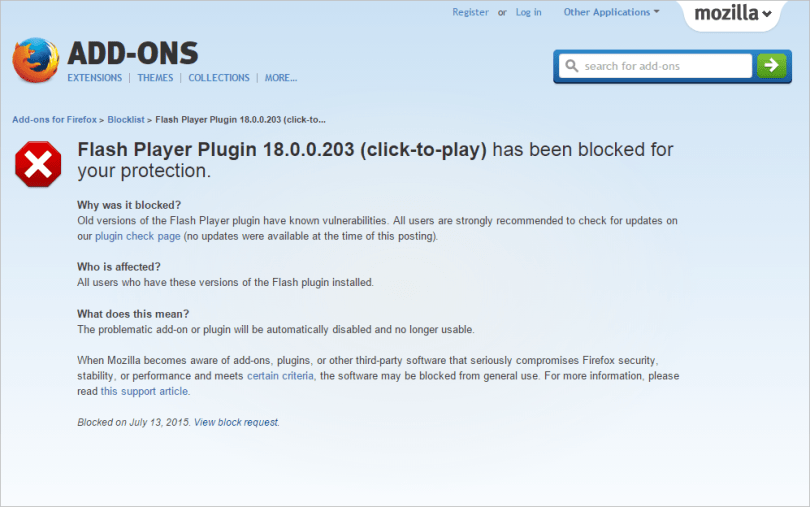 A day after, when the Facebook’s new Chief Security Officer tweeted a call to set an end date for Adobe Flash, today Mozilla Firefox sent a notification saying, that they have now blocked Flash on Firefox as software standard. Mark Schmidt, the head of Firefox team of Mozilla, tweeted confirmation that all the versions of Flash player are blocked in the browser.

It is time for Adobe to announce the end-of-life date for Flash and to ask the browsers to set killbits on the same day.

BIG NEWS!! All versions of Flash are blocked by default in Firefox as of now. https://t.co/4SjVoqKPrR #tech #infosec pic.twitter.com/VRws3L0CBW

Even on the add-ons page of Firefox, there is a warning saying that the plugin has been blocked for your protection. 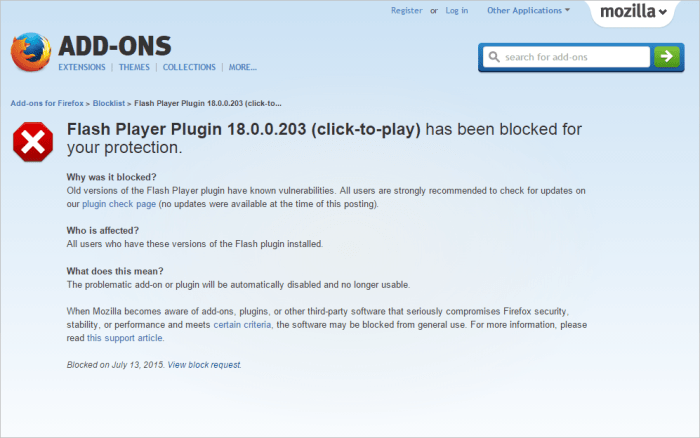 Adobe is working on a fix for this issue as three major vulnerabilities were discovered when 400GB of internal documents and source code from Hacking Team was leaked online in a hack which occured last week.

This might not be a good news for many, but technology giants are gradually removing support for flash, as its reportedly being used to spread malware on users’ systems via security exploits. Youtube is currently using HTML5 player for its videos on Chrome and latest browsers. Apple also had removed flash support in 2010, while Adobe itself stopped active development of Flash Player for mobile since 2011.